I tried my hand at making some clothes for a Living Castle day in the Château de Puilaurens this summer. My fiancé and myself went in our usual XVth clothes last year, and felt a bit out of place, since the event is more focused on the XIIIth century. Let's be clear: although we're both in reenactment, this event is more about having a good day, teaching people a few things they didn't know about the Middle Ages and raising money to help two local kids pay for expensive medical treatment than historical accuracy. Therefore, showing up with clothes too modern by two centuries didn't even make us stand up in the crowd. But we knew, and we didn't like it, so we decided to try and make something more appropriate for the time period. Since I was loaning clothes to a couple of friends who were there with us, I also decided to play around with their costume a bit and make it look a bit more historical.

Here's what I had in the beginning for the first of my friends: basically, it's the first layer (the shirt) and the third one (the surcot - outer dress). Add to that that the shirt is heavy cotton (I think it was Leo***** Car****), and the surcot, while somewhat more appropriate in blue linen, had short sleeves that shouldn't really be there (either you have sleeves, or you don't, but no middle ground. There was also a neck decoration that is probably pretty bad. 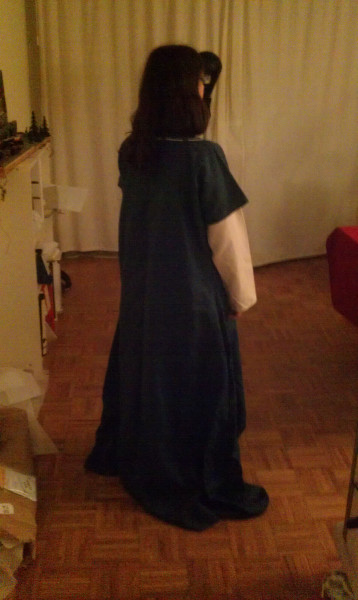 What I was aiming for: as my friend didn't want to run around too much, I decided to go for something that would pass as sort-of high status. She didn't want to get too hot (the event was in July), so I decided against adding another layer, and to instead dye the shirt red to be able to use it as a kirtle, and forego the shirt that would have been mostly hidden anyway. The shirt didn't really have the right shape, but would be hidden by the surcot anyway. The surcot I would mostly leave alone, but the sleeves had to go, and I added some fur to go with her status. The neck decoration I would leave alone, because it was a) pretty even if not period, and b) difficult to remove.

I had to do the dye job twice on the shirt, as the first one was more pink than red, but was mostly happy with the result. It used to have some weird lacing thing near the collar, which I removed, and put an amigaut (a slit in the neck) so that my friend could still put it on easily, which I closed with a brooch. As headgear, she already had a veil, so she kept that (I would have gone for the barbette and touret, but didn't have the time), and lent her a belt and a small drawstring purse.

The surcot was my first time dealing with fur. Unfortunately, the rabbit skins I had weren't that easy to work with, as they just fell apart in some places. But in the end, it went pretty well.

Here's what I ended up with: 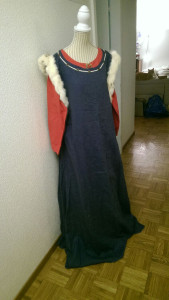 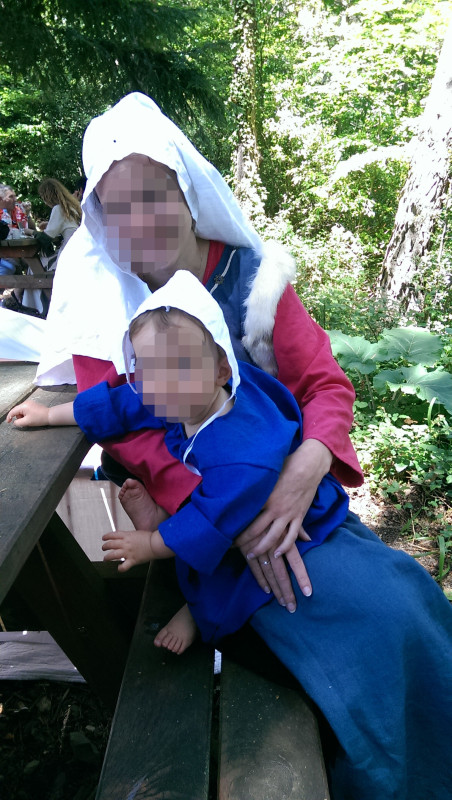 Her son's costume I made from scratch. It's just a small linen smock and coif. (The smock I actually made a bit big for him, hoping that he may perhaps wear it next year. ^^')

For his father, it was easier, as I didn't need to cut or sew anything. But his tunic was an ugly shade of grey (used to be black, and we tried to remove the dye, but it didn't work so well); it was also a heavy cotton thing from Leo***** Car****. For the rest, he already had a coif and leggins that sort of looked as if he were wearing chausses, and he'd bought medieval shoes not long before. So I just decided to bleach the ugly grey thing and try a new dye job, also in blue so that the whole family would look nice together, and lent him a belt and beltbag.

So here he is, the guy in blue in the background: 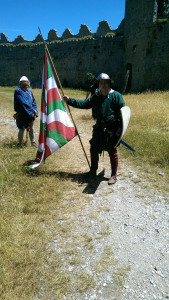 The guy in the foreground is my fiancé, who didn't need me to make him a costume, because he's a big boy and knows how to sew. :) 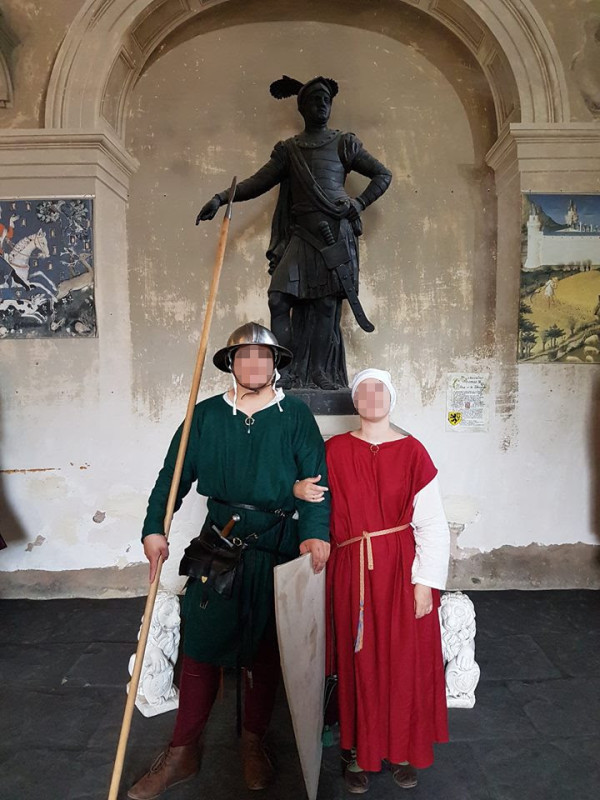 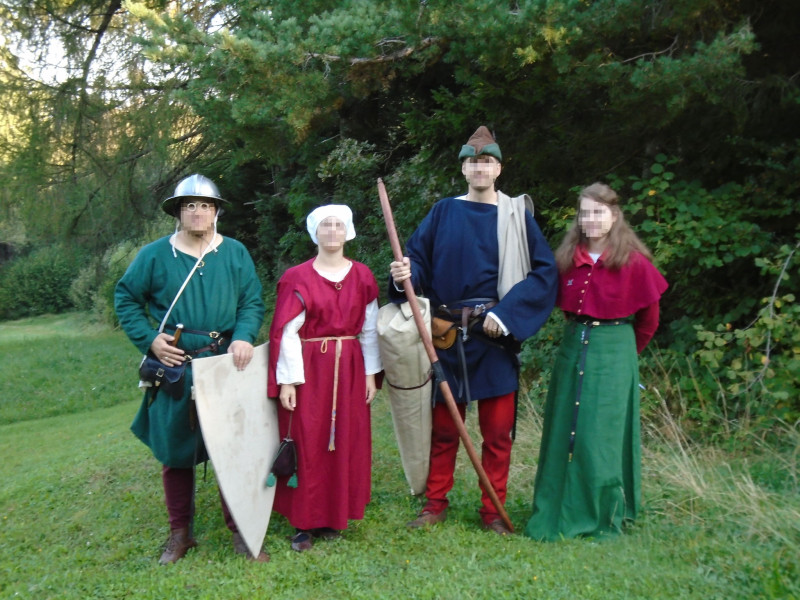 You can see in the first picture that I made it a bit too short, as my chausses, shouldn't be that visible, but it was a rush job (also, only the outside seams are made by hand), and most of the time it's not too visible. It's made of the same kind of light woolen cloth as my fiancé's tunic. I have the sleeves in a knot behind my back in the three first pictures, just because it's practical. The fourth picture, where I'm still not wearing my sleeves, but you can see them better, wasn't actually taken on the Living Castle day, but at a latter date at another event where people dressed for different time periods, so you have my fiancé and me (XIIIth), a friend (XIVth), and another friend (XVth). (And yes, my fiancé's glasses are period, though they would have been used for readind only.) I had to make a new headdress, because while I can tie this one in a way that's more XVth century, my XVth headdresses would never pass for something XIIIth century. The shirt was also new, with wide sleeves that I could roll up if needed, which I thought goes rather well with the dress social standing, and I got a woven belt instead of a leather one, which is what I usually wear.

Hope you enjoyed that!
Collapse